The Great Depression is an era in the United States history before WW2. It’s mainly an economic depression but reasons of it was various from social problems to climatic problems. First signs of The Great Depression area is came in September 4, 1929 but it became a worldwide crisis in October 29, 1929 which date is known as Black Tuesday. It hit many countries, unemployment in USA raised to %25 but in the countries supported by USA, rate was over %50. Era hit both biggest production areas and harvest prices. How many years the Great Depression lasted? 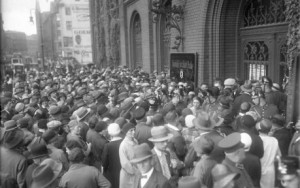 In the middle of 30s, era of Bank Robbery has started. Many banks were under threats and many bans faced the robbery problems. Bank robbers like Bonnie and Clyde became very popular and also people were supporting Bank robbers because people were accusing Banks as the reason of depression.
After the first shock period in 5 years, politicians, historians and economists started to argue about the reasons of The Great Depression Era and they tried to find ways for recovery. One of the most popular theories about cause of era was Economist John Maynard Keynes’s theory. He wrote the book “The General Theory of Employment, Interest and Money” about causes of problem in 1936. Also Austrian economists, Marxists and many other groups wrote about reasons of economic crisis. According to Marxists, economic crisis was the result of instable capitalist model. Also theories like Gold Standard, productivity shock, debt inflation and non-debt inflation were very popular.
From the first day of economic crisis, Farm owners affected deep. It was 750,000 farms that owners lost because of bankruptcy. Also food riots started and people plundered the fields. In the second half of 30s, also The Dust Bowl period is started. It was a big drought and most of the soil turned into dust. Also dust storms were in the biggest level of century and these storms made the farms left usable after depression unusable. Also after dust storms hit the farms, thousands of people became homeless. 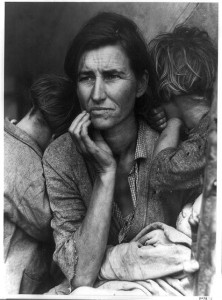 Recovery of The Great Depression started in 1933 in many countries. According to historians, recovery steps also started in the same year for USA but people couldn’t see this effect for one decade. In 1940, unemployment rate in country was still %15. New president Roosevelt started New Deal policies and it helped the recovery process run faster. USA gained big commercial and political success in 1945 and crisis lasted after WW2. 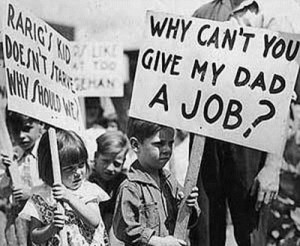