Hamster is a popular rodent type and it’s now one of the most sold pets ever. They eat mostly fruit but they also attack on vegetables. They occasionally eat insects. Hamsters are used as laboratory animals in the first half of 1900s because of their strength in different conditions and ability for adaption. In the history, it’s possible to see that first experiments on making the hamster a house pet started in 1839 but it was not possible since 1940s. After domesticated completely, American scientists used the wild and domesticated hamsters in compare tests and they found important knowledge about nature of animals. How many types of hamsters are there?


Syrian Hamster is the most popular hamster type in the world. It lives in the wild alone. According to researches, it mostly tries to enter a community of other hamsters but it’s happy when alone. Also when Syrian hamster joined into a group, it can be aggressive and mostly hurts other hamster types seriously. They are little and cute so Syrian Hamsters are known most commonly found hamster type in pet stores all over the world. Their color is white but some of the Syrian Hamsters are getting a gold like color in older ages so they are also known as ‘Golden Hamster’ After breeding experiments and gene mutations, there is now a new type of Syrian hamster also known as “Long Haired Syrian Hamster” . A female Syrian hamster is bigger than male one and breeders mostly choose female ones for domestication. 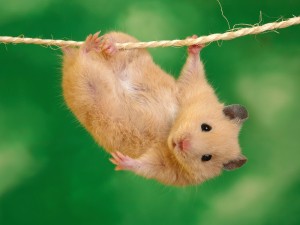 Dwarf hamster or Russian hamster is also popular as “Djungarian Dwarf Hamster” According to researches, origin of this type is Northern Kazakhstan. Because of cold origins, there’s a white winter coat on them. They can make their coat stronger enough when the environment is colder or snowy. But after breeding and gene mutation, Russian hamsters are now getting problems on snow and they are comfortable in house temperature between 18° C to26° C. They are not aggressive in groups especially if there’s a same gender group but if they are not taken into a group in the young ages, they can be aggressive.
Campbell’s Hamsters is a popular mutation of Russian hamster. Because of their thick coat, Campbell’s hamsters are known as stronger as and more adaptive than Russian hamsters. They are fatter than Russian hamsters and some bigger. They have a yellow-brownish coat which makes the good-looking. They can live in groups but group must be set in the same gender of Campbell’s hamsters. 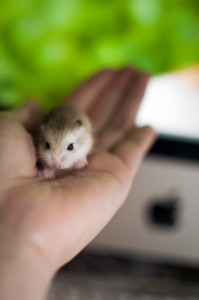 Roborovski Hamsters are popular with their short and cute tails. Also because of yellow-brown colouring and mostly two-tail genetics, they are known as a special breed. They are one of the smallest hamsters ever and they can reach 4-5.5cm most. They don’t have also dorsal stripes which is standard in hamsters. They can live in a group with same gender and their lifespan is longer up to 3 years.
Chinese Hamster is known with long-tail and less wooly coat. They are mostly popular in Hollywood movies with their dark-brown dorsal stripe. They have also very dark ears and edges of them white in contrast. Many pet stores sell only Chinese hamsters because of their nature. They are some aggressive in first look but it’s possible to teach them and make quiet. Average lifetime of Chinese hamster is 1.5 to 2 years. Male is mostly larger than female and pet stores are mostly selling female ones.
Many countries prohibited or limited experiments on hamsters and today they are mostly using for compare works on the university laboratories. 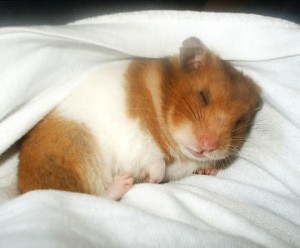