According to latest researches, it killed 75 million people in two years. Some historians believe that number is over 200 million. World population is estimated as 450 million before Black Plague and it decreased the number to 350 million. There were some known epidemics of plague in the history like Plague of Justinian in 7th century but none of them were so strong and mortal.
According to latest researches, Black Plague firstly started in Yunnan province of China. It killed 25 million Chinese before going to Europe. Black Death came to Europe with Mongol armies. Also traders carried it with ships. When Black Death reached European coasts, European sailors learned that India, Mesopotamia and Syria are covered with dead bodies because of Black Death. 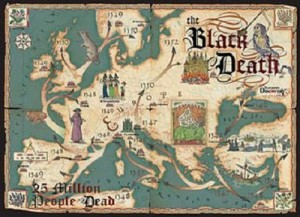 According to researches, Black Death is firstly seen in Caffa of Crimea. Date was 1347. According to popular story, Mongolians soldiers started to catapult infected soldiers to city. Then Black Death had been seen in Sicily in Northern Europe.
After Sicily, outbreak spread to Pisa and it shows that Black Death entered Europe from North Italy first. Then it arrived in Marseille. In June 1348, France, England, Portugal and Spain was fighting with Black Death. It went to Scandinavia and Germany in 1349. It reached Russia in 1351. It spread to whole Europe in four years but couldn’t spread to Kingdom of Poland and parts of Belgium and Netherlands. 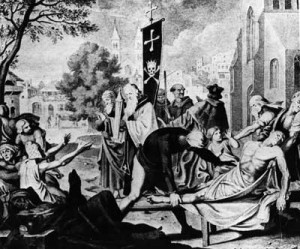 Black Death also hit Middle East. According to historical writings, it reached Alexandria of Egypt in 1347. After Alexandria, it spread to Gaza, Palestine and Aleppo. When it reached Mecca it’s accepted as the second round of Black Plague in East.
There are many theories about the biological source of Black Death. Many people in 14th century believed that Black Death caused by bad air. Also people and animals were living in same places so Black Death’s transmission became easier. After first signs of Black Plague, humanity discovered quarantine and it’s firstly set in Dubrovnik in 1377.
Discussions about death toll caused by Black Plague are still continuing. According to Philip Daileader’s research in 2007; %50 population of Europe died in 4 years. In countries like Spain, France and Italy, it killed %80 of population. In England and Germany, it killed %20 of whole population.
Also death toll in Middle East and West part of Europe caused by Black Death is discussable. According to historical resources, death toll is 40% of Egypt’s population. Total deaths in Paris are 100.000 and total death in Florence is 120.000. Hamburg and Bremen lost half of their population.
Also Europeans targeted many different groups for Black Death. Most targeted group was Jewish People. In many countries, people burned Jewish groups alive. Also beggars and pilgrims are killed. In the second half of epidemic, people started to accuse lepers. Many people with skin diseases like Acne are killed. Especially in Germany and Strasbourg, big Jewish communities are killed. It changed the Europe not only in population, but also in religious and cultural asp 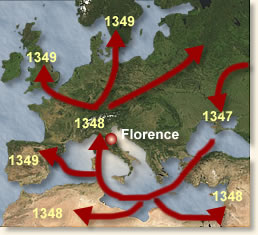