There are a lot of languages more than you might have thought.  There are a number of coherent (but quite different) answers that  linguists might give to this apparently simple question. 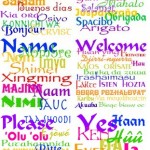 Languages are not at all uniformly distributed around the world. Just as some places are more diverse than others in terms of plant and animal species, the same goes for the distribution of languages. Out of Ethnologue’s 6,809, for instance, only 230 are spoken in Europe,  while 2,197 are spoken in Asia. One area of particularly high linguistic diversity is Papua-New Guinea, where there are an estimated
832 languages spoken by a population of around 3.9 million.

That makes the average number of speakers around 4,500, possibly the lowest of any area of the world. These languages belong to between 40 and 50 distinct families. Of course, the number of families may change as scholarship  improves, but there is little reason to believe that these figures are radically off the mark.