It was the 1880s that the first Muslims started to move USA. In the big migration era, they came to USA from Ottoman Empire, South Asia and Arabia. According to researchers, most of them are assimilated in years. After this period, African Slaves started to come USA and nearly %30 of them was Muslims. It was a small community in the first period of 1900s but after 1950 they started to grow with conversion and immigration. After 2000s, Muslims started to focus on being United States residents. It was 2005 that nearly 96,000 Muslims became US residents. In 2009, number raised to 115.000. How many Muslims are there in USA?


Because The U.S. Census Bureau have never collected religious information, it’s hard to know the exact number but according to experts, number is over 2.75 million. Number is controversial because different organizations are giving different numbers. For example American Jewish Committee produced a report about Muslim population in USA and number was 1.86 million. But another important organization “Council on American-Islamic Relations” reported the number as 7 million. 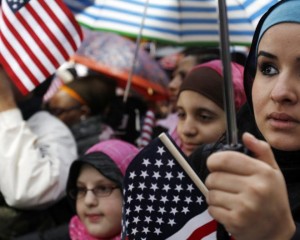 It was till 1907 that Muslims didn’t make any religious movement but in 1907, a Lipka Tatar group came from Poland opened the first Muslim Organization Center in New York City. Society’s name was “American Mohammedan Society.” First Mosque is opened in 1915 in Biddeford, Maine by Albanian Muslims.
Black Muslim Movement was also very important for the American Society. It was very rare to see Blacks creating communities under Islamic influnces before 1900s first half. First community created by Black Muslims was “Moorish Science Temple of America.” In 1930, The Nation of Islam is set but first leaders of NOI like Wallace Fard Muhammad and Elijah Muhammad announced that white people are devil. In 1950s, NOI changed its face with Malcolm X’s spokesman. Also boxing world champion, Muhammad Ali’s join to NOI took big interest. Malcolm X then left the NOI after problems and made the pilgrimage to Mecca. After he converted to Sunni Islam, Muslim blacks started to convert also to Sunni Islam.
According to researches, today most of the Muslims in USA are living in good conditions. Especially large Pakistani American community is well educated and rich. Their income levels started to pass native born white Americans in 2000s. Muslims in America are mostly choosing to be doctor, engineer, financial analyst or scientist.
Muslims are mostly supporting Republican Party in USA. This support is coming from Republican Party’s politics about social conservatism. According to researches, %70 of Muslim Community supported George W. Bush and Republican Party in 2000 election and it was an important factor on the election results. After September 11 attacks, George W. Bush and Republican Party used an anti-Muslim rhetoric and number of Republican Party supported decreased. After 2004, most of the Muslim population supported Democratic candidate John Kerry and then Barack Obama. 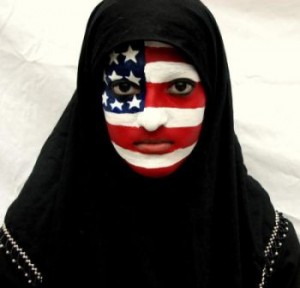 Conditions for a Muslim in USA are going well in recent years. According to news, after 11 September, number of Muslims in USA gets double. Beside Muslims who believe they are always marginalizing, growing Muslim population is forcing companies to adapt their places for Muslims. Especially big companies are decorating new places and Mesjids for Muslims. Also there are over 15,000 Muslims in the USA Military Service today.
According to a research in USA by Pew Research Center, Americans get confused about Muslim Society. %40 of Americans believes that Muslims are loyal to live in America like Christians. But %52 of them also support FBI’s wiretapping. Also 64% of them are not allowing their daughter or son to date a Muslim. 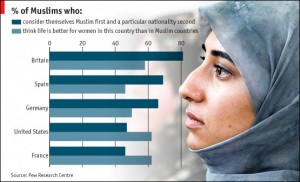