Matrix series is one of the most popular movie series in the history. Series is created by Andy and Larry Wachowski. Distribution is made by Warner Bros. Pictures. Story of movies is mainly a cyberpunk future story with deep religious and philosophical ideas. Also it’s possible to see parts from mythology and martial art movies. Movies are set in a dystopia governing by sentient machines. Machines use energy of human body and keep them in pods. Mind of people live in a simulated reality called as Matrix. How many movies are there in the Matrix series?

“The Matrix Reloaded” is released in 2003. It’s again directed by the Wachowskis. Distribution is made by Warner Bros. Main story sets six months later the first events. Again Keanu Reeves, Hugo Weaving, Carrie-Anne Moss and Laurence Fishburne starred. Monica Bellucci took an important role in second movie. Movie made an opening with Thursday opening party and grossed $37,508,303. It’s one of the biggest openings with Spider-Man’s $39.4 millon. It also changed the destiny of popular movies and took 73% from Rotten Tomatoes. There were also critics and Entertainment Weekly ranked movie as “The 25 Worst Sequels Ever Made”.
Last sequel of series is “The Matrix Revolutions”. Movie is released six months after “The Matrix Reloaded.” Movie is directed by Andy Wachowski and Larry Wachowski. Keanu Reeves, Hugo Weaving, Carrie-Anne Moss and Laurence Fishburne starred on movie. Also Monica Bellucci is seen again as Persephone. Wachowski brothers said that series is finished but story of series is continued in The Matrix Online. Budget of film was US$110 million while it’s gross is $427 million worldwide. Movie couldn’t carry other sequels success and took 36% from Rotten Tomatoes. Metacritic scored 47/100. Viewers generally found the film unsuccessful. Main critics were about action based script and lack of philosophy set in first two sequels.

After series is finished, lots of anime, games and comic books are released. The Animatrix became the most popular anime released in the story of Matrix. It’s a nine movie animation series using series’ characters and storyline.
Three games are released based on Matrix series. They are Enter the Matrix, The MMORPG The Matrix Online and The Matrix: Path of Neo. None of them become highly popular.
The Matrix Comics is the comic series of movie. Series is written by the Wachowskis. Matrix series’ website released some of series for free.
Warner Bros released lots of set for Matrix series. Most popular set is The Ultimate Matrix Collection with 10 DVDs. Collection is including movies, The Animatrix and 6 discs of production notes. Also there’s a limited version which is offering bust of Neo. 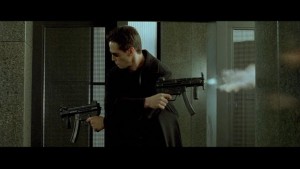