There have been at least five major ice ages in the Earth’s past. Outside these ages, the Earth seems to have been ice-free even in high latitudes.

Rocks from the earliest well established ice age, called the Huronian, formed around 2.4 to 2.1 Ga (billion years) ago during the early Proterozoic Eon. Several hundreds of km of the Huronian Supergroup are exposed 10–100 km north the North Shore of Lake Huron extending from near Sault Ste. Marie to Sudbury NE of Lake Huron, with giant layers of now-lithified till beds, dropstones, varves, outwash, and scoured basement rocks. Correlative Huronian deposits have been found near Marquette, Michigan and correlation has been made with Paleoproterozic glacial deposits from Western Australia.

The next well-documented ice age, and probably the most severe of the last billion years, occurred from 850 to 630 million years ago (the Cryogenian period) and may have produced a Snowball Earth in which glacial ice sheets reached the equator, possibly being ended by the accumulation of greenhouse gases such as CO2 produced by volcanoes. “The presence of ice on the continents and pack ice on the oceans would inhibit both silicate weathering and photosynthesis, which are the two major sinks for CO2 at present.” It has been suggested that the end of this ice age was responsible for the subsequent Ediacaran and Cambrian Explosion, though this model is recent and controversial.

A minor ice age, the Andean-Saharan, occurred from 460 to 430 million years ago, during the Late Ordovician and the Silurian period. There were extensive polar ice caps at intervals from 350 to 260 million years ago in South Africa during the Carboniferous and early Permian Periods, associated with the Karoo Ice Age. Correlatives are known from Argentina, also forming in the center of the ancient supercontinent Gondwanaland. 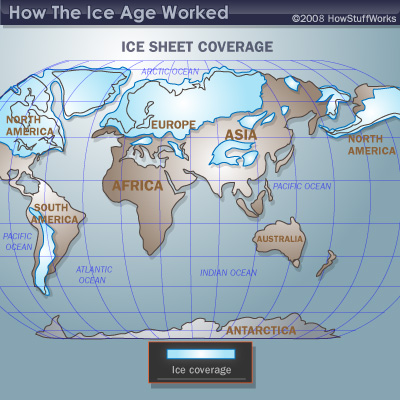 The Karoo Ice Age occurred from 360 to 260 million years ago. It is named after the glacial tills found in the Karoo region of South Africa where evidence for this ice age was first clearly identified. It is thought that this ice age was largely caused by the evolution of land plants with the onset of the Devonian period. The Earth during this time was covered with an immense degree of vegetation compared to earlier times, and this caused a long term increase in planetary oxygen levels and reduction of CO2 levels that resulted in this ice age.

An ice sheet on Antarctica began to grow some 20 million years ago. The current ice age, the Pliocene-Quaternary glaciation, started about 2.58 million years ago during the late Pliocene when the spread of ice sheets in the Northern Hemisphere began. Since then, the world has seen cycles of glaciation with ice sheets advancing and retreating on 40,000– and 100,000-year time scales called glacial periods, glacials or glacial advances, and interglacial periods, interglacials or glacial retreats. The earth is currently in an interglacial, and the last glacial period ended about 10,000 years ago. All that remains of the continental ice sheets are the Greenland, Antarctic ice sheets and smaller glaciers such as on Baffin Island.