Year was 1969 and Cold War was forcing the US and Russia to a big race. Nations couldn’t finish the race on earth and it went to space and moon. It was the time that people have technology to land Moon but it was the question which nation will be the first. In this mess, NASA announced “Apollo 11—Lunar surface operations”. After many missions to Moon without human by Russia and USA, American were on Moon at 2:56 UTC July 21, 1969 and Neil Armstrong set his first step into moon and said “That’s one small step for [a] man, one giant leap for mankind.” It’s broadcasted live from TV but besides celebrations, broadcast created controversies. Today %20 of people don’t believe that man landed into Moon and it was a hoax. How many hoax theories are there about Moon Landing?


“The Waving flag” is one of the points that conspiracy theorists uses for proving their claims. Landing is broadcasted in TV live and it was clear that US Flag is waving on moon. Because there’s no air in the atmosphere of moon, it’s not possible to see a waving flag on it. After claims and theories increased, NASA made an explanation and said that flag was in a tube which made the ripple effect. Also some astronauts and officials explained the event with video’s shaking while recording on Moon but it was not clear on TV broadcast.
Another theory is about the crater that must be created by space craft on Moon when it’s landed. It’s clear that there’s no sign of dig on the surface of Moon on video. Theorists watched the different video footages again and again and they couldn’t find any sign of it. Because Moon surface is covered by fine lunar dust, there must be sign of landing device. After theories, NASA made an explanation and said that gravity in Moon is not like earth and all landings are very soft. Also Moon surface is solid rock so there’s no impact crater on it. 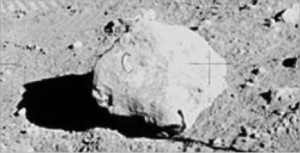 Most of the theorists believe that Moon landing was created in TV studio. Theorists searched for clues about their theories and find many. One of the clues that used by conspiracy theorists is the object seen on helmet of astronaut. It’s clear to see that object is on a wire and hanging on it. Most of the people believes that it’s a spotlight in the studio. According to NASA explanation, there’s no item there but it’s only a reflection from bad quality of photos. There’s no match object on other photos.
Hidden cables and problems on slow-motion walks of astronauts are also points that conspiracy theorists are using. According to theorists, Moon’s gravity is not allowing such jumps of astronauts and when film’s speed is increased for x2.5, astronauts are walking like in earth. Theorists believe that there were some hidden cables and wires used for astronauts and helped them while jumping or moving. Also there are many photos from footages that show hidden cables. 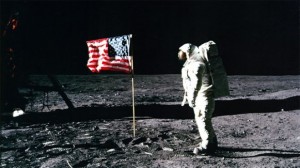 It’s easy to see that any of the Moon landing videos or photos have stars but Moon has no sky and stars must be clear and also they must be seen shiner than earth on there. NASA left the explanation of this question blank and said that bad quality of photos caused stars to wash away. But most of the photos were high quality once but they also don’t have any stars.
The “C” Rock is also a famous item that theorists use. In the video footage of moon landing, it’s clear to see that there’s a rock with “C” letter on it. NASA reviewed the “C” as a joke. 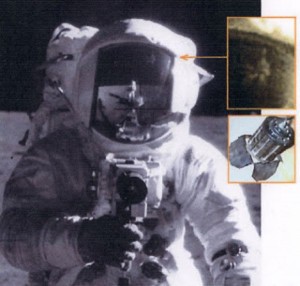