Americans like to eat but obesity is also a big problem. Science world believes that amount of a hamburger is bigger than a person’s need and also additions on these meals are making the people obese. It’s true that after many organizations worked on it, most of the fast food chains went to reduce meal’s calories but there’s also a breakfast and dinner meal tradition in USA which is hard to break totally. Especially popular local restaurant with their popular meals are offering more and more calories for all. How many calories are there in the popular American dishes?


One of the most popular restaurant dishes in USA is “IHOP’s Country Fried Steak and Eggs“ It’s a king’s breakfast with monster calories in it. It includes 8 oz. fried beef steak, two eggs, two buttermilk pancakes and hash browns. You may want the 8 oz. fried beef steak with sausage gravy. This breakfast is including 1,760 calories. Also it has 3,720 mg of sodium and 23 grams of saturated fat which fills all daily need of a person from morning.
“Johnny Rocket’s Bacon Cheddar Double Burger” is another popular meal in USA and it became the news on important newspapers with its over 1700 calories. It comes with unlimited fries, beef, big hamburger bread and more. It has also 2,380 milligrams of sodium and 50 g of saturated fat in it. Daily need of a man is 2,000 calories, 1,500 milligrams of sodium and 20 grams of saturated fat today so it’s very high.

The Bistro Shrimp Pasta is also famous but people eating this meal became lower and lower after it became notorious with 3,120 calories in it. Company producing the meal is “The Cheesecake Factory” According to calculations, there’s 89 grams of saturated fat in it and it’s enough for 5 day consumption of a person.
“Uno Chicago Grill’s Deep Dish Macaroni & 3-Cheese” is known with the name “hidden devil” because it’s hard to understand this meal has 1,980 calories in it. It has also 3,110 mg of sodium and 71 grams of saturated fat. According to daily calculations, 71 grams of saturated fat means 3.5 days of human’s fat consumption.
Italians like to eat meat but they are hard to get weight. It’s hard to understand it but true. It’s also definite than Italians have a big effect on obesity of USA with their delicious meals. “Maggiano’s Little Italy’s 18 oz. Veal Porterhouse” is one of them. It’s a tender steak but big enough to satisfy any people. Only meat has 1,900 calories in it. Also there’s 40 grams of saturated fat. But restaurants are not stopping with such high calories and adding buttered red potato side to meal which means 810 calories more.

American like barbecue and especially steak has a special place on meals. ”Chili’s Full Rack of Baby Back Ribs” is a popular meal on many states with its 2,330 calories. Also many people are adding more and more salt to this meal and making it a real devil of obesity.
Sometimes small doesn’t mean low calorie and “Smoothie King’s Peanut Power Plus Grape Smoothie” is the biggest example of it. It’s serving only 40 oz but it has 1460 calories in it. Also it has sweat equal to 22 teaspoons which means 3.5 days’ worth of sugar for a person. Many people are also adding grapes into it which means more days’ worth of sugar.
Today %10 of all American health bills are causing by obesity and this number will be over %30 in 2023. 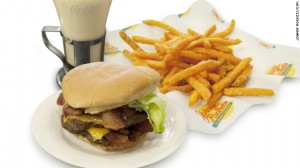