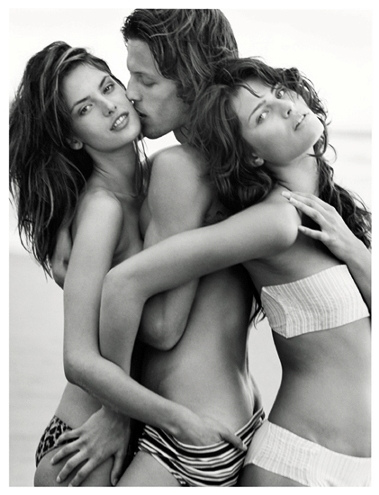 Victoria’s Secret Angel Alessandra Ambrosio is also “PINK” line’s spokesman today. She started to go modeling classes on 12. At 15, she was modeling for Dilson Stein. Milestone on her career was Brazil’s Elite Model Look. After she won Brazil’s Elite Model Look she became cover of Brazilian Elle magazine. Guess signed her for a Millennium GUESS? Campaign. Also she has walked on catwalks of important brands like Prada, Oscar de la Renta and Chanel. She also has a brand called Alessandra Ambrosio by Sais. Since engaged to Jamie Mazur, she always became top news with her boyfriends. How many boyfriends of Alessandra Ambrosio are there?

Alessandra Ambrosio is always called as one of the world’s sexiest women. Also People magazine’s chose her “100 Most Beautiful People in the World”. She likes to make cameo in movies and series. She took role on Entourage, Late Night with Conan O’Brien, Project Runway season 2: Team Lingerie. She also took role on Casino Royale movie. She became guest star on famous TV series How I Met Your Mother’s popular episode “The Yips”.
She also has seen on the Forbes’ most earning models list every year. Her annual earn is over $5 million and she’s coming after Adriana Lima. She has seen on campaigns of Dolce & Gabbana and Moschino. Also she became the new face of Brazilian sportswear company Colcci. She starred on Colcci’s ads with Ashton Kutcher. She was chosen to Carlos Miele’s catwalk. Forbes’ also listed her on the rising career models list.
She always liked to be on magazines and last big bomb resulted with Alessandra Ambrosio became top news was her angel wings 30-pound Angel Wings. Jenny Manik Mercian designed these special wings and 105,000 Swarovski crystals was possible to count on these wings couple. Wings were copper and they plated with 23-carat gold. Alessandra Ambrosio carried these heavy wings for 30 seconds in catwalk. Also it became heaviest wings a model carried for Victoria’s Secret.
She’s now starring on TV Series “El Hormiguero”. It’s the sixth season of popular comedy series and she appeared as a quest in 5 March 2012 daily program. Also there are lots of rumors that she will be on a new TV show like Heidi Klum’s fashion program but details are not leaked still.
Her first long relationship was Marcelo Boldrini. They managed to date for 4 years from 2001 to 2005. They tried to live without magazines but some private photos of them leaked to media. They posed on Pirelli Calendar 03 together. Some magazines claimed that they married in a private wedding but couple didn’t accept this. Then they broke up in 2005. Magazines wrote that problem was Alessandra Ambrosio’s rising career while Marcelo Boldrini has some problems with it. 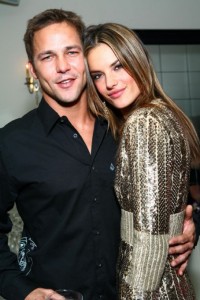 After Boldrini, Ambrosio opened her heart to a surprise dating with famous journalist Steven Allain. Steven Allain was famous with her problematic relationships and fans of Alessandra Ambrosio didn’t believe their relationship since first couple photos are leaked to magazines. Paparazzi never leave them alone and this became a big problem after a short period. They broke up in the same year.
After Boldrini, Ambrosio found her life’s boy. Jamie Mazur is a successful Californian businessman. They started to date on 2005. In the first three years of their relationship, they hardly photographed together and some magazines started to write Alessandra Ambrosio with other men. After it started to become a problem and Anja Louise was born, they engaged in 2008. Also they have a boy named Noah Phoenix was born in 2012. 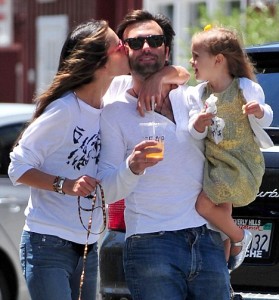