Bermuda Triangle or Devil’s Triangle with its popular worldwide name and it’s located in North Atlantic Ocean’s west side. US Navy is not accepting the triangle officially and didn’t made any review about planes and ships disappeared there before. Some people believe that area is longer than 500.000 square miles but according to some scientists, total area is 1.500.000 square miles. Name of triangle comes from 1964 publication of Argosy magazine and it gives the borders as Miami coasts, Puerto Rico coasts and Atlantic island Bermuda which makes a triangle. Area is the most common route of heavily traveled shipping lanes. How many theories are there for Bermuda Triangle?


There are some little historical signs about disappears on the triangle before 1950. In this year, Associated Press released an article about Bermuda Triangle and it became popular after some more magazines wrote about it. After articles became popular, writers of these articles wrote books about events on Bermuda Triangle. In 60s, it became a worldwide city legend.
Most of the writers of Bermuda Triangle used supernatural titles and explained the reason of disappears with unnatural items. Some of them explained it with Atlantis and some connected the disappearances to UFOs.
Today there are many explanations from writers, ship captains, pilots and scientists about Bermuda Triangle. There are some works of scientists about Bermuda Triangle and compass problems. According to researches, there are many local magnetic anomalies are possible in the area. Compass change can be naturally or unnaturally but scientists believe that compass changes in the area are normal because of location’s point to the North Pole and South Pole.
Some scientists believe that all disappearances and problems on the area is causing by Gulf Stream. Stream on the area comes from Gulf of Mexico and goes to Straits of Florida. Researches showed that Gulf Stream is making a river effect on the ocean and taking the boats to away places from their route. 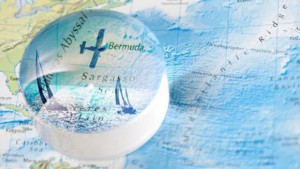 Human error is also can be a reason for disappearances in Bermuda Triangle. It’s an area hard to direct the boats or ships. It was Harvey Conover that lost with his sailing yacht in the Bermuda Triangle in 1958 but then investigation showed that Conover was stubborn to go wrong route and he entered into a storm hitting the California coast.
It’s true that area is the top point of storms and rains because of its location and geographical features. There are many ships in the history caught the storms in the area and disappeared. According to scientists, a powerful downdraft of cold air is the reason of crashes and disappearances in Bermuda Triangle. Ships like Pride of Baltimore and Concordia faced the similar problems in the area in history. 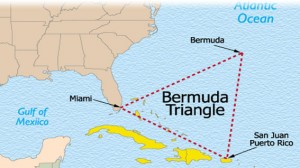 Some researches in Australia showed that methane hydrates in the sea water is decreasing the density of it. There are many crashed in the continent causing by methane hydrates and it can be a reason of disappearances in Bermuda Triangle. Also a rogue wave can be the reason of sink or disappearance. But most of the explanations are not giving clue about planes lost in the area.
Also there are many supernatural explanation which can be true but people also like to believe them. Most known theory is Atlantis. Also some people believe that area is a base for UFOs. It was possible to see in Steven Spielberg’s popular movie “Close Encounters of the Third Kind” that passenger of plane are abducted by aliens in the Bermuda Triangle. There are also theories that U.S Navy uses the area as a base of secret researches and sometimes work creates rogue waves. 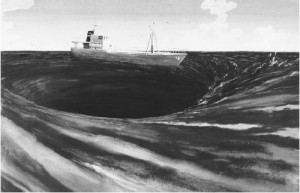