The Naked Gun is a legendary crime comedy movie series. Project is created by Zucker, Abrahams and Zucker organization and distribution of movie is made by Paramount Pictures. It’s a movie adaptation from TV series Police Squad! After series are cancelled on six episodes, producers decided to adapt it to cinema. Movie make a big critical and commercial success and entered into movie classics with its funny and satirical atmosphere. Also it made the actor Leslie Nielsen a comedy star and his role Detective Frank Drebin became a popular culture icon. Especially Weird Al Yankovic’s cameos were unforgettable scenes of movie history. How many The Naked Gun movies are there?


There are three Naked Gun movies in the series. They are “The Naked Gun: From the Files of Police Squad!”, The Naked Gun 2½: The Smell of Fear and Naked Gun 33⅓: The Final Insult.
First movie “The Naked Gun: From the Files of Police Squad!” is released in 1988. Leslie Nielsen, O. J. Simpson and Priscilla Presley starred on this first movie of series. Movie critics joined this one into the “series as the top movies of slapstick comedy” category. Movie is also showing the spirit and atmosphere of its era. Also using real names and satirical look on the American government and police are important titles from movie. Movie is beginning with a meeting in Beirut and leaders like Mikhail Gorbachev, Idi Amin, Fidel Castro and Ayatollah Khomeini are planning a new terrorist act against United States of America. Movie gained both box office and critical success. According to latest list of Total Film, “The Naked Gun: From the Files of Police Squad!” is the 39th greatest comedy films ever. It entered also Best 1,000 Movies Ever Made list of The New York Times and some movie lists of Empire Magazine. 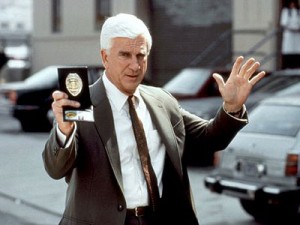 Second movie of series “The Naked Gun 2½: The Smell of Fear” is released in 1991. Leslie Nielsen, O.J Simpson and Priscilla Presley again starred in the second movie of series. David Zucker is the director of second movie and there are many cameos like the Chicago Bears members. Movie starts with ceremony of honored Frank Drebin by President George H. W. Bush. Movie also includes some titles like hackers which is not a popular topic in the first half of 90s. Also subtexts on nuclear war is carrying the atmosphere of 90s into cinema. Movie couldn’t gain big commercial success but home video of series became one of the most selling home video products ever. Also it was a big surprise that movie knock Robin Hood: Prince of Thieves which was one of the most assertive works of year. Movie took mixed reviews from viewers and web sites. IMDB score of movie is 6.7 while RT score is 57% only. 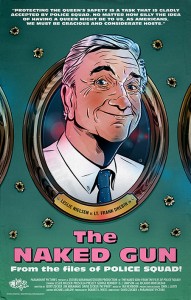 “Naked Gun 33⅓: The Final Insult” is the last movie of series. There were deep rumors that series will not be a trilogy because of failure in second movie but then producers decided to make it. Leslie Nielsen, Priscilla Presley and O. J. Simpson starred in the last movie of series. Also movie made news with newcomers of series like Anna Nicole Smith and Fred Ward. Story of the movie starts with retired Frank Drebin and his wife Jane Spencer. But everything changes where there’s a bombing event in the Oscar night. Movie is the only title directed by Peter Segal in the series. Movie couldn’t gain critical success and most of the series fans found it more formulaic then others. It made $51 million gross in the worldwide.