Today accessing the books is easy and you don’t need to go even a bookshop. You can buy one easily from online book shops. But book writing history is old and there are some books that can’t be bought from online book stores. Most of the people are hard to believe but there are many books sold for over $1 Million in the history. Some of them were the last published copy on close to extinction and some of them were only one in the world. Also some collectors bought them because they are hard to sell but never lose their value. How many books are sold for more than $1 Million?


William Blake is one of the most popular writers in the history and finding an original copy of his books are very hard. It’s “The First Book of Urizen” by William Blake, printed in limited numbers in 1794 and many people believed that there’s no more original copy of book but in 1994, Sotheby’s of New York made an auction and sold an original one for $2.5 million. According to experts, it’s one of the seven copies left in the world. Name of buyer is not announced. 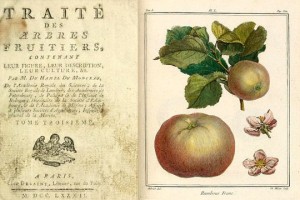 J.K. Rowling, the famous writer of Harry Potter series created “The Tales of Beedle the Bard” book before writing Potter series. It’s possible to see that most of the characters on Harry Potter is inspired first in this book. Rowling created seven original copies of this book and all copies were hand written. Also Rowling made their illustrations herself. According to an interview made with Rowling, there were 7 copies and she gave them to friends and editors and no one was selling it. But then an eight copy is revealed and Amazon.com bought it for charity. All the money came from book selling is sent to The Children’s Voice charity campaign. 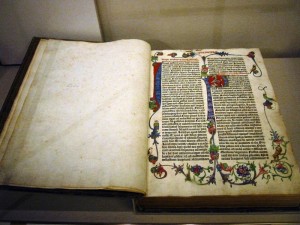 Geographia Cosmographia is a legendary book and most of the book experts believed that it has never exist. But Sotheby found an original copy of Geographia Cosmographia, which is the first printed atlas and it’s also the first book with engraved illustrations. In 2006, Sotheby sold it for £2,136,000. Some book related websites claimed that it’s sold for over $4 Million. There are still some discussions about copy of Ptolemy’s Geographia Cosmographia printed on 1477.
It’s still hard to believe that a book written about fruit trees is sold for $4.5 million but it’s true. Henri Louis Duhamel du Monceau’s famous book “Traité des arbres fruitiers” with Pierre Antoine Poiteau’s illustrations is sold for this money. It’s a five volume set with 16 different varieties. Experts believe that it’s a unique book about fruit trees and also time the book written ad story of book is very important.
The Gutenberg Bible is one of the books that everyone heard about. According to historians, there are only 48 original copies left in the world today. Christie’s New York made a record-breaking sell in 1987 and sold an original The Gutenberg Bible copy for $4.9 million. Buyer of The Gutenberg Bible is still unknown.
William Shakespeare is one of the most famous writers in history and naturally his books’ original copies worth millions. It’s sold for one pound in the Shakespeare period but today one copy of them is priceless. According to historians, original copy of book written by Shakespeare was 750 pieces and 228 are still in existence. Christie’s New York made an auction in 2001 to sell one original copy and it went to Microsoft co-founder Paul Allen for $6,166,000. 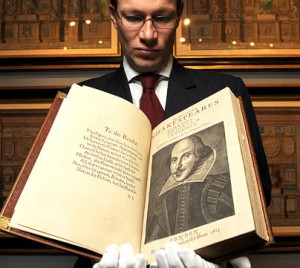